Alberta is prone to wildfires: Be careful over the summer season 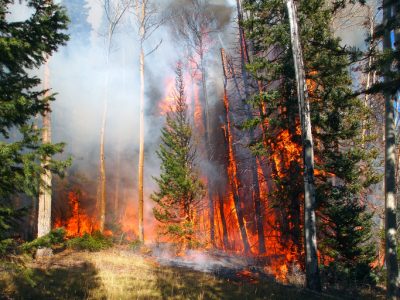 Every Albertan knows that summer often means wildfire season in the province. They can be terrifying, raging with abandon until huge firefighting efforts are able to extinguish them … or they can slowly go on for months before eventually burning themselves out. They turn the skies grey, everything smells like smoke, and it can be difficult to breathe.

Albertans need to be very careful when dealing with any kind of spark or flame in the summer, as evidenced by a recent Canadian Underwriter story. A gender reveal party, which are becoming more and more popular, went very, very wrong. The exploding target (filled with either pink or blue powder), ended up starting a large wildfire that grew to the size of half a football field. The party received a $600 fine for starting the blaze, which was only 10 kilometres from Fort McMurray.

Alberta is a very dry province, so our current forecast for a hot and dry summer means we can almost certainly expect a few more wildfires before the temperatures cool down again. Carelessness can be the culprit, but lightning is also a relatively common cause. Across the country, lightning strikes occur about every three seconds in the summer and cause about half the wildfires. Canadian Underwriter estimates the total number of hits at somewhere between 2 and 2.5 million a year, with an average of 400,000 strikes each summer in Alberta.

With such a high risk of wildfire in the province, property owners can feel confident that virtually every home insurance policy covers for damages caused by fire – including those started by human error such as leaving a candle burning unattended.  Insurance brokers like us at Lane’s can help you determine whether you have adequate coverage for your property and your belongings. We can also ensure you have coverage for living expenses while and necessary repairs are being carried out to your home.

An important detail rural property owners should pay particular attention to is whether or not firefighting insurance is included in their policy. In certain counties, property owners are expected to pay at least part of the cost of firefighting services should they be required.

Most comprehensive auto insurance policies also include coverage for fire, but if you live in a high-risk area for wildfires in Alberta it’s worth it to ask an insurance broker to help you double check.

Even though we have lots of lightning, in 2019 more than 70% of fires in Alberta were started by humans, say officials in a 2020 Calgary Herald article. Causes include careless smoking, sparks from ATVs and other off-road vehicles, out of control campfires, and, of course, lightning.

The spring and summer of 2019 was a particularly bad one for wildfires in Alberta – especially during the month of May – when three huge blazes complicated response efforts from wildfire management agencies. All told, by the end of the summer 989 wildfires would burn close to 900,000 hectares of the province – more than 3.5 times the average of the previous five years. The High Level fire, which started because of a lightning strike, was the largest, forcing the evacuation of 5,000 people and burning 237,000 hectares ((570,000 acres).

Nobody will ever forget the visuals of the residents of Fort McMurray fleeing their town in 2016 as a massive wildfire rained down sparks and ash over the highway. How this devastating blaze started has never been fully determined, although experts believe it was most likely caused by a human. The Fort McMurray wildfire sits at the top of the list of Canada’s costliest natural disasters, with a total loss of $5.621 billion. The entire population of Fort McMurray – 90,000 people – were forced to evacuate at a moment’s notice, and 10% of the city’s buildings were completely destroyed. Insured losses topped $3.5 billion, which led to rising home insurance rates for a large number of Albertans.

The Kenow fire of 2017 was also started by a lightning strike. In just  a few days Its size spanned more than 35,000 hectares. The town of Waterton, the Blood Tribe, Cardston County and the Municipal District of Pincher Creek were all evacuated.

If you’re interested in finding out where the wildfires in Alberta are, status reports are regularly updated by Alberta Agriculture and Forestry.

Campfires are also a common cause of wildfires, so much so that fire bans are not unusual in areas at high risk. To prevent wildfires in Alberta, practice campfire safety:

To put the fire out, let it burn down as much as possible, stirring the embers into the ashes. Pour water on it, stir, pour water, stir, and keep going until you are sure the fire is completely out. There should not be any heat coming from the ashes at all.

Lane’s Insurance is an independent brokerage offering excellent customer service, outstanding claims support and highly competitive rates on a complete range of home insurance products. We can help you save by accessing all the available discounts and bundling your policies. Contact us at our Calgary, Banff, Edmonton, or greater Alberta offices.