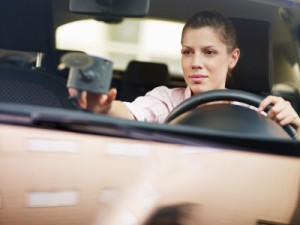 Unfortunately, statistics show that Alberta’s drivers may be struggling to adapt. In 2012, a total of 4,613 charges were laid under the new legislation. Through the first three-quarters of 2013, 3,664 drivers have been charged, putting us on pace to eclipse last year’s total. What’s more is that distracted driving charges are being laid at almost double the rate of impaired driving charges. Avoiding all forms of distracted driving is an important way to keep your rates as low as possible for auto insurance in Calgary.

In a recent Canada-wide study, the following five driver distractions proved to be the most common, with no variance among drivers of different ages and no variance from one region to another:

While most people associate distracted driving with cell phone use, you will notice that no cell phone-related behaviours cracked the top five.

You should also bear in mind that the law applies to both cyclists and drivers, and that previous legislation banning anything that impedes with the driver’s ability to control the vehicle from being in the front seat is still on the province’s books. The penalty for breaking the new law is a $172 fine.

While none of the items that were listed on the top five driver distractions in Canada are technically illegal under Alberta’s new law, it is strongly recommended that you avoid all those activities while you are driving.

Any form of distracted driving puts you at greatly increased statistical risk of being in an accident, which will adversely affect your auto insurance in Calgary rates – to say nothing of the property damage and injury risks.

Auto Insurance Calgary: Why Distracted Driving Is Such a Big Problem

Research done right here in Alberta also supports the theory that talking on a hands-free cell phone while you’re behind the wheel may be just as dangerous as using a handheld device. Dr. Anthony Singhal, a neuroscience and psychology professor at the University of Alberta, concluded a major study into distracted driving in 2011 – just before the new legislation went into effect. The major findings of his research included strong evidence that hands-free cell phone use is just as dangerous as handheld cell phone use while driving. According to Singhal’s research, important attention centres in the brain distract drivers regardless of whether or not they’re using a hands-free device while driving. This is certainly worth bearing in mind if you want to minimize your accident risk and keep your rates for auto insurance in Calgary as low as possible.

At Lane’s Insurance, we want you to stay safe while you’re on the road. We actively encourage all our clients to avoid any and all behaviors that take your attention off the road, whether they are technically illegal or not.

As a leading Alberta-based insurance brokerage, we work hard to get you the lowest possible rates on auto insurance in Calgary.  We also take pride in being a valuable informational resource to all drivers in the province and beyond, and we invite you to follow our blog  to enjoy a broad range of informative and helpful consumer-focused articles on insurance topics.

Finally, we’re pleased to offer fast, free quotes for auto insurance in Calgary, both online and by phone.