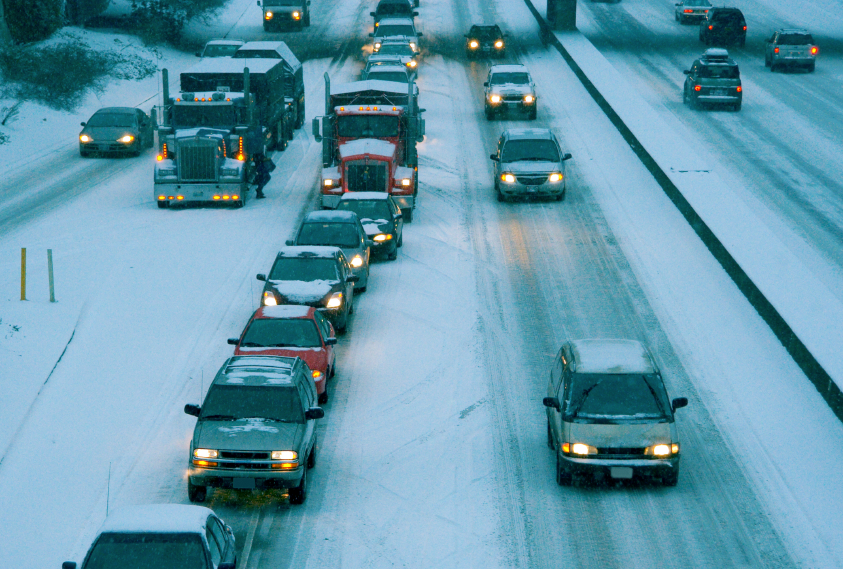 Winter driving requires an entirely different skill set, and many drivers make it worse for themselves and everyone else with their bad habits on the road. Accidents are so common they sometimes seem inevitable, but they are more than often the result of bad habits developed over time. When helping to process auto insurance claims we have heard it all. Here are a few of the astonishing winter driving myths we have heard over time and why you should absolutely ignore them.

The science of winter tires was developed to allow for greater traction and maneuverability on frozen roads. To us at Lane’s Insurance, they are essential. Winter tires are made of softer, more pliable grades of rubber that don’t become as rigid in colder temperatures. This, in turn, helps them remain responsive during steering and braking. Their deep grooves also work to disperse water, slush, and ice, which helps to prevent slipping and sliding. And you should put them on sooner than most people think. Experts advise that winter tires be installed as soon as the temperature drops below 7 degrees Celsius consistently.

There is a persistent belief that all-wheel drive is the absolute best thing to help get drivers through the winter safely. Although it is helpful for gaining traction, for example, getting up an icy hill, it will not help you stop faster. During testing carried out by Consumer Reports, a front-wheel drive vehicle performed just as well as an all-wheel drive vehicle in braking tests. So don’t be that over confident driver blowing past everyone on the road with the thought that your AWD will save you should you need to hit the brakes fast. You won’t be able to blame anyone but yourself after an accident.

Never forget that any regular 20-minute commute can turn into a multiple-hour nightmare marathon during the winter months. It is highly advisable to keep your vehicle filled up at all times during the winter, as you don’t want to run out in the middle of a traffic jam … or ever. Not only is this inconvenient, it’s dangerous. In addition, driving without enough gas is actually bad for your vehicle, leading to fuel pumps wearing out sooner than they should.

“Warming your car up” used to be a necessity in the winter, but modern engines have 100% circumvented this environmentally harmful habit. Idling is bad for a lot of reasons. Idling wastes a lot of fuel (just 10 seconds of idling uses more fuel than restarting your car), causing tons more CO2 emissions than necessary. It also “strips” oil from components such as cylinders and pistons. Modern vehicle engines warm up a lot faster when you are actually driving, so go ahead and get moving. Try to stay below 60 km/h for the first 10 minutes, however. In addition, leaving your car idling when you are not in it is a great way to get it stolen.

We’ve all seen that person driving with all of their windows completely frosted over, peering through a tiny hole in the windshield formed by the defrost on at full blast. Before setting off, ensure to clear your vehicle entirely of snow, frost, and ice. Windshield wiper fluid and the defrost option on your heater are simply not strong enough to clear windows to a point that it is safe to drive. And snow flying off your hood, roof, and trunk is not only distracting for the people behind you, it’s also hazardous. Don’t forget to clean your lights off, too, to make yourself better visible to other drivers.

The City of Calgary’s road salt management plan calls for its use when the temperature is consistently between zero and minus 10 degrees Celsius, as this is when salt is most effective. So in all reality, since Calgary temperatures usually drop below minus 10 degrees Celsius quite regularly during the winter, salt is not used that often. When it is used, however, it doesn’t mean that the ice has disappeared. Salt breaks the seal between ice and pavement by lowering the melting point of water, but it doesn’t actually completely melt ice. If you are following a salting truck, be careful. The roads are more than likely still slippery.

Defensive driving can be described as driving to prevent accidents, no matter what the other drivers are doing, and it’s the very best way to operate your vehicle at any time, not just during the winter. Techniques include always watching and planning ahead for anything unexpected, being prepared to react at any time, respecting others on the road, controlling speed, and avoiding distracted driving. All of these will allow you to spot an accident about to happen and have a good chance of avoiding it.

Lane’s Insurance is a leading Alberta-based brokerage, providing a wide range of auto insurance options at highly competitive rates. In addition to great prices, Lane’s Insurance also offers unsurpassed claims support and courteous customer service. We prefer to do business in person, so contact us at our Calgary, Banff, Edmonton, or greater Alberta offices to find out how we can help you find the insurance you need at a rate you can afford.