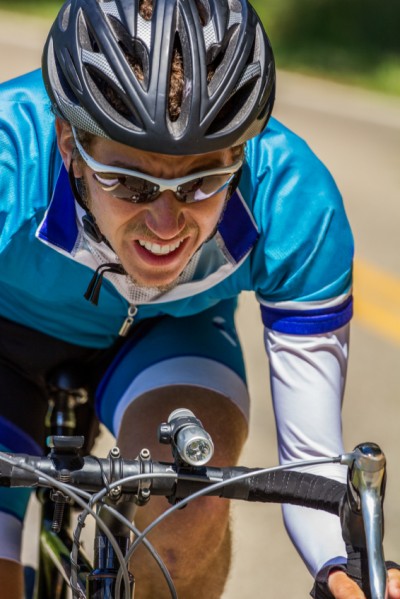 Driving downtown can be nerve-wracking. There’s a lot to watch out for. Short blocks, one-way streets, a lot of traffic lights, and pedestrians crossing everywhere means drivers have to pay a lot of attention, all the time.

Add that to the fact that Calgary now has both cycle tracks and bike lanes and driving in the core of the city can seem very confusing. As city residents are getting out and about on their bikes to explore more often, as evidenced by visible lineups at bike stores and repair shops, it’s worth a reminder as to what the responsibilities of both drivers and cyclists are when navigating the streets together.

What’s the difference between a bike lane and a cycle track?

First of all, it’s important to know the difference between cycle tracks and bike lanes. Cycle tracks are those that are separated from other traffic by a physical barrier – usually a concrete curb. Bike lanes provide shared space on a roadway without a physical barrier. To recognize an on-street bike lane, watch for road markings such as a white line, bicycle icon and diamond-shaped caution symbol. Yellow diamond-shaped signs with a car and a cyclist asking drivers to “share the road” mark shared lanes.

Understanding what each of the different signs mean is the most crucial step to navigating the downtown. For example, sometimes cyclists and drivers use the same signal, other times cyclists follow pedestrian signals, and other times they follow their own signals. As always, drivers must yield to anyone in crosswalks. This handy guide explains the many different signs and signals.

What are my responsibilities as a cyclist?

Cyclists should always plan their routes well ahead and be well-prepared for the different situations they will encounter. There are thousands of kilometres of bikeways and pathways in Calgary that can get people virtually anywhere. They need to pay close attention to the signage on the cycle tracks as well as to motor vehicles and other cyclists.

Some cycle tracks also have dedicated green turn boxes, which act as safe ways to make a right or left turn. Bikes can move into the green box, turn their bike, cross at the crosswalk, and continue on their way without having to fight vehicular traffic. These are especially helpful when moving from a two-way street to a one-way street, and vice versa.

What are my responsibilities as a driver?

As well as cyclists, drivers need to pay close attention to signage while also watching carefully for all others on the road and in the crosswalks.

Driving tips for sharing the road with cyclists:

Bikes are insured under home insurance, condo insurance or tenant insurance, however they are generally subject to special limits on their coverage, which are caps on the amount an insurance company will pay for lost property. An average special limit for bicycles is $1,000 for every bike you own. So, if your bike is stolen and you file a claim, you would have to pay the amount of your deductible (usually $500) to receive $1,000 for a new bike. If your bike is worth more than $1,000 and that is the special limit on your policy, consider adding an endorsement, just as you would for jewelry, collections, and art pieces.

As a cyclist, you should also be aware that you may be entitled to compensation through the Motor Vehicle Accident Claims Program, providing insurance in Calgary if you are injured by an unidentified motorist or third party while riding your bicycle. Learn more about the program here.

Lane’s Insurance is a leading Alberta-based brokerage providing a comprehensive range of competitively priced insurance products. Contact us at our Calgary, Edmonton, Banff, and Alberta offices today to talk about all your insurance options.