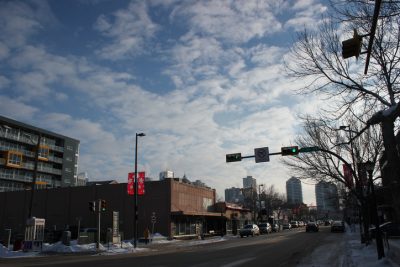 We have been inundated by the white stuff already in Calgary, with Oct. 2 breaking a 104-year record for the most amount of snow falling in this month … ever. More than 38 centimetres were measured on the ground, and the roads were absolutely treacherous. Many motorists spent up to 13 hours stranded on the Trans-Canada Highway west of Calgary, prompting the shutdown of one of Canada’s busiest stretches of road, and up to 80 Calgary Transit buses ended up stuck and unable to service those waiting for transportation. CBC Calgary reported more than 250 vehicle accidents between the hours of 11 p.m. Oct. 1 and 3:30 p.m. Oct. 2, many resulting in minor injuries. A fleet of 59 sanders and 22 graders took to the streets to clean up the mess, which were supported by an additional 74 operators and 40 pieces of equipment brought in from Edmonton, Red Deer, Okotoks and Medicine Hat.

Be Extra Cautious at These Calgary Intersections

Accidents happen most often at intersections. Each year the U.S Federal Highway Administration reports approximately 2.5 million intersection accidents, most of which involve left-hand turns. Intersection crashes make up approximately 40% of all vehicle accidents, a number second only to rear-end collisions.

Knowing where accidents are most likely to happen is one way to avoid a car insurance claim. Being well aware of impending danger is a tried-and-true defensive driving technique, so be extra careful when approaching these intersections named in the Calgary Police Service’s September Monthly Statistical Report for 2014, which indicates where the most crashes occur in Calgary:

CBC Calgary also recently polled Calgarians to discover which intersections make their commute unbearable at times. Although they may not rank as high for incidences of accidents, they definitely rank high for causing extreme frustration in drivers. Here’s what’s driving you crazy on your daily drives:

Avoid an annoying car insurance claim by taking the time to drive with care during the winter. Some tips from the experts include:

Lane’s Insurance is a leading Alberta-based car insurance brokerage offering excellent rates and outstanding service to customers throughout the province. If you’re looking for superior coverage for competitive prices and you want an insurance provider that prioritizes courteous, personalized service and the industry’s most complete claims support, visit Lane’s Insurance online for a fast, free car insurance quote from our respected providers.

Remember that Lane’s also offers a discount of up to 20 percent if you bundle your car and home insurance together!