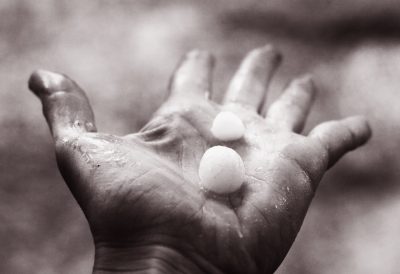 Alberta’s hail season is well-known by storm chasers, who come from far and wide to watch the spectacular work of Mother Nature here in our home province. Many Albertans aren’t aware that hail, as well as thunder and lightning, are actually uncommon in several parts of the world, and so it’s actually a special treat for many to get to see one, the other, or both at the same time. Calgary is smack dab in the middle of Alberta’s “Hail Storm Alley,” which runs from south of Calgary to central and northern Alberta. As a matter of fact, Calgary is the hail storm capital of Canada! Thankfully, your Calgary home and auto insurance is in place to protect your property.

Hail, thunder and lightning are most common is landlocked areas like Calgary. A cold front is a strong indicator that a hail storm could be coming, as well as telltale grey clouds, thunder and lightning. Atmospheric conditions must be right, with clouds containing a high amount of moisture and at freezing temperatures. Listen carefully to weather reports during the spring and summer in Calgary, as it can be extremely dangerous to be caught outside during a hail storm.

The worst hail storm in recent memory took place in 2012 in Calgary on August 12. It was so fast, furious and ferocious it left a trail of destruction resulting in about $700 million in insured damages, mostly to vehicles that were unable to get to shelter. The storm dropped golfball-sized hail stones that pummeled everything in their path.

The year before a hail storm accounted for $380 million in insured losses. A massive storm that hit near Airdrie in 2014 resulted in $530 million in insured damages. And another storm just last summer in early August saw toonie-sized hail stones come down in waves, which left well-kept gardens in tatters.

In a 2014 news release from the Insurance Bureau of Canada (IBC), Bill Adams, IBC vice-president, Western and Pacific, said, “It’s a fact that the frequency, severity and cost of severe weather are on the rise all across Canada.”

“We’re certainly seeing this in Alberta and the Prairie provinces where homes are being damaged more frequently by hail, heavy rainfall and strong winds, which makes it critical for people to know how to protect themselves and their property.”

Hail can also wreak havoc on crops, which is why farm owners should check their farm insurance coverage to make sure hail is one of the named perils on their plan.

What Do I Do If I Hear a Hail Storm Is Coming?

If you hear reports of a hail storm on the horizon, make sure to do the following:

Keeping your roof in good repair is the best way to avoid hail damage to your home. Don’t expect that you’ll be able to easily make a claim after one of Calgary’s colossal hail storms if you have not done so. Most policies take into consideration the age and condition of your roof before considering reimbursement. In addition, as a general rule, if your roof is more than 10 years old, depreciation value will be factored in, meaning you will be unlikely to receive the full replacement amount.

If You Are On The Road During a Hail Storm

It is never advisable to drive in a hail storm. If you can, drive to underneath an overpass or shelter such as a parkade. Driving will make the impact of hail stones worse. Try to angle your vehicle so that the hail is hitting the front of the car. Windshields are incredibly strong and are designed to withstand a large amount of impact. Stay inside your vehicle, and cover yourself with a blanket to protect from broken glass. Lying down and keeping your back to the windows is your best bet.

If Hail Damage is Incurred to Your Home or Vehicle

If your property has incurred damage due to a hail storm and you think you need to make a Calgary home or auto insurance claim, take the following steps:

In addition to working with Alberta’s most trusted insurance carriers, one of the best things about Lane’s Insurance is its industry-leading claims support. Lane’s offers expert assistance, along with great attention to detail and customer service staff that is invested in resolving your claim favourably.