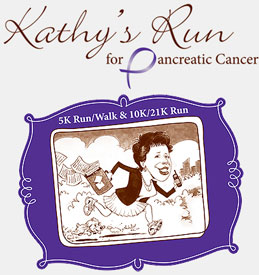 Lane’s Insurance is proud to be a sponsor of this year’s Kathy’s Run. The only running event of its kind in Western Canada, 2014 marks its first appearance in Calgary. Raising funds for pancreatic cancer research, the run is named after Kathy McCollum, who was diagnosed with pancreatic cancer in early 2011 and lost her battle the same year. Funds raised will go to support life-saving research.

“This coming year, thousands of Canadians will be diagnosed with pancreatic cancer and told there is little hope for survival. It is one of the deadliest forms of cancer – there are no early warning signs and most patients die within six months because they are diagnosed too late to be helped by any treatment.”

Since 2011, the Kathy’s Run Team has raised more than $180,000 for research into early detection methods of pancreatic cancer, as timely treatment is critical for prolonging the life expectancies of those affected.

The day will include a 5 kilometre walk/run, a 10 kilometre run, and a popular half marathon for competitive runners.

For an entry form and more information go here.