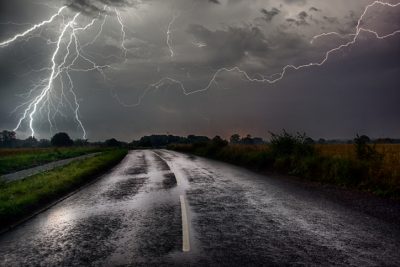 Yesterday, thousands of Calgarians hunkered down after the city was alerted to a tornado growing west of the city. At around 2:30 p.m., authorities reported that a thunderstorm with the potential to turn into a tornado had been spotted near Springbank. With just about every tornado comes hail, and parts of northwest Calgary saw a severe storm … but not nearly to the extent of the record-setting June 13 hailstorm, which left a lot of homeowners confused about the true value of their insurance.

Tornado insurance should be included on every home insurance policy, whether named on its own or called “extreme” or “high wind insurance” as a peril. Tornado insurance may not be top of mind fpr most homeowners in Alberta, but their occurrence is actually quite common in this province – and it seems no more so than this summer. The July 23 tornado warning did not turn into a twister touching the ground, which has already happened 10 times since tornado season started in May.

On average, Alberta sees between eight and 14 tornadoes every year. Along with southern Ontario and southern Quebec, the southern Prairies are the most tornado-prone area of the country. In 2016, there were 11 recorded tornadoes. In 2017, there were eight. 2018 saw a reprieve, with only two recorded tornadoes, but 2019 surged back with nine.

The only other country with a higher recorded frequency of tornadoes is the U.S.

July 23 was a good reminder that tornadoes do not only happen in rural areas, as goes the myth. The warning served as a good reminder that in 2016, a tornado touched down in Calgary, measuring at the lowest grade on the tornado scale at F0. However, it was a tornado, it was in Calgary, and F0 winds measure at about 116 kilometres per hour. Another F0 tornado was also recorded near the Calgary airport on 2017.

In a week’s time, Alberta will remember its worst tornado in history. On July 31, 1987, a huge twister measuring one kilometer wide ripped its way through the Edmonton area. Twenty-seven people lost their lives as the tornado stayed on the ground for up to an hour. The entire extreme wind incident lasted five hours. More than 600 people were injured and approximately 300 homes destroyed as the F4 tornado made its way through the south and eastern parts of the city. An F4 rating means winds upwards of 330 kilometres and devastating damage.  More than $332 million in property damage strewn across four major disaster sites was eventually tallied.

The Edmonton tornado of 1987 was the impetus for the Government of Alberta’s creation of the Alberta Emergency Management Agency (AEMA). The AEMA’s Emergency Alert system app is an effective way to make sure you are as on top of the weather as possible. When you install the app you will be alerted on your cell phone or computer should there be an extreme weather threat in your area.

Is Tornado Insurance Part of My Home Insurance?

All home insurance policies differ, but most include extreme wind incidences as part of their listed perils. If you taking care of your property and perform regular maintenance, keeping your insurance company up to date about any changes or renovations, and regularly taking a thorough home inventory, the claims process should go smoothly.

What is a Tornado?

The hail that accompanied the Edmonton tornado was the size of a tennis ball or larger, witnesses say, and hail actually regularly accompanies tornadoes. With just about every thunderstorm, there is a risk of a tornado. Any sudden change in wind direction at a high altitude will cause air to start spinning horizontally. Another sudden change in direction of the wind from underneath can turn the swirl over and cause a funnel, although not all tornadoes form a visible funnel cloud.

If You Are Home During a Tornado

The Government of Alberta recommends those who are home or in a building during a tornado to:

If You Are Driving in Extreme Winds

The best thing you can do is be proactive when it comes to extreme weather, and do not venture out if there have been warnings or the forecast looks ominous.

If you are caught out on the road when extreme winds are hitting, leave the road and find shelter immediately. Vehicles are not safe during any severe wind storm. If there is no other place to go, leave your vehicle and move to low ground, like a ditch.

If You Are Driving in Hail

When hail hits, it’s pretty scary for a driver. The best thing to do is to find a safe place to stop your car off the road and take shelter. Never stop in the road, and never stop under a bridge. This could set off a deadly chain reaction of accidents.

If you can’t find shelter, pull off the road as far as possible, turn on your hazards, and  keep down with your face away from the windows. Cover yourself with a blanket if you can.

Trust Lane’s for All Your Alberta Insurance Needs

If you ever have questions about your coverage, the best place to turn is an insurance broker such as those of us at Lane’s Insurance. Insurance brokers are your partners in the insurance business. We have very high standards as to what policies we will present to our clients, and always ensure our clients have a good understanding of what they are purchasing. We are able to assess your insurance needs on a more broad scale than any single provider can, and our exclusive agreements with the best insurance providers in the business allow us to cross reference assess your needs to a level no single insurance company is able.

Lane’s Insurance is pleased to serve homeowners and residents throughout Alberta. Use the following regional links to contact us at: