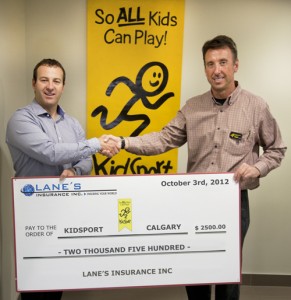 With chapters all over Canada, KidSport believes that all kids should be able to enjoy the lifetime benefits that come from participating in organized sports. The organization works to remove the economic barriers that make it financially challenging for kids to become involved in sports when they are young. It is through the development of important alliances that KidSport ensures the sustainability of their program, so kids across the nation can develop an appreciation for physical fitness that will carry on into adulthood, while also enjoying the sense of community that comes from belonging to a team.

One important alliance for KidSport is Lanes Insurance Calgary, who recently ran an online campaign where they donated $10 to KidSport for every new policy written. Lanes Insurance was proud to be able to present KidSport with a cheque for $2500.

Chad Mullen, the president of Lanes Insurance, believes it’s important to remember your roots. “My team and I have worked very hard to build Lanes Insurance to where it is today. It has been one heck of a journey so far, but we feel it’s important not to forget where we came from.” The company believes in the importance of giving back to the community. “We truly feel honoured to be in a position to help children get involved in sports.”

For many kids, becoming involved in organized sports is their first exposure to a sense of community outside the home. Mullen says, “Sports were a very important part of my upbringing. I was heavily involved in competitive ski racing for ten years, went to the World Championship several times, raced in the world cup, you name it! I chose to support KidSport because I know that being involved in sports truly helped mold who I am as a person today.” The benefits of participating in organized sports are well supported: not only do children stay physically active; they also improve their self-esteem, self-confidence, and academic performance. They learn to make new friends, work out differences, and understand the importance of working together as a group. “Once we learned about KidSport and how they help children get involved, we knew this was an organization we wanted to support!”

By participating in a social cause campaign like KidSport, Lanes Insurance Calgary has found the most rewarding part of the process is in knowing that their efforts will be directly benefiting children. President Chad Mullen knows firsthand that having the ability to help others and give back to the community, especially with children, is a very fulfilling experience. “We look forward to staying in touch with KidSport and seeing some of the children our efforts have helped get involved with sports.”

Mullen hopes others recognize the importance of this organization and support KidSport along with Lanes Insurance Calgary. “I truly believe in the cause. KidSport’s numbers speak for themselves. The number of kids they are helping increases every year. Obviously there is a great need for this type of charity and Lanes Insurance is proud to be a part of it.”

The Alberta chapter of KidSport started in 1995, and as of the end of 2011 has helped 19,425 kids participate in organized sports. According to Mark Kosak, KidSport’s Regional Director for Calgary, they expect that number to be around 23,000 by the end of this year. They have disbursed almost $5,000,000 to families across the country to help pay for sports registration fees and equipment, and the need is still growing. Mark has been involved with KidSport for three years and has always loved the premise behind the organization. As a kid, he had to pay for his own sports, so he relates to kids who don’t know what they’re missing. “Oftentimes families are doing the best they can,” Kosack says, “Calgary is one of the most affluent cities in Canada, possibly North America, yet we still have so many families that can’t afford to put their children into organized sports. We really appreciate what all donors do. They are giving kids the chance to learn.”

Everyone has a responsibility

When companies like Lanes Insurance Calgary decide to help, it means that they actually care about the quality of life in their community. As Mark Kosack says, “Philanthropy is a personal choice, and starts at the top. We believe that everyone has a responsibility to give back if you’re in a position to do so.”

At KidSport, one of the best experiences they have is when a parent calls them and says their child has decided to donate their birthday gifts to KidSport to generate donations. These are “seven to ten year-old kids,” Kosack says, “What an amazingly unselfish thing for a kid to do.”

Not everyone feels that responsibility, but Mark Kosack believes Lanes Insurance Calgary does. “The fact that Chad and Lanes Insurance chose KidSport amongst the other reputable causes means so much.” Lanes Insurance is extremely proud to be able to help KidSport and wants to thank all those who directly helped this initiative by taking out new policies. If you are interested in learning more about KidSport and helping the kids in your community, please visit www.kidsportcanada.ca.

Tips for hiring a contractor and protecting the final product
October 8, 2021

Cover your most prized possessions with collectible insurance
October 1, 2021

Six millennia of risk assessment: A history of insurance
September 24, 2021

As fall begins to descend, check your trees for potential hazards
September 17, 2021