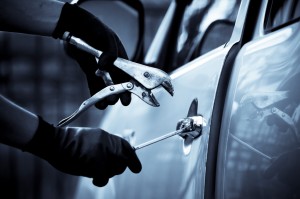 Some may not realize that auto theft is a major cause of insurance claims, so taking extra precautions to keep your vehicle safe is a must for drivers. Unfortunately, auto theft can be a bit of a problem in Calgary, with some neighbourhoods experiencing higher rates of theft than others. It’s vital to be extra vigilant if you live in an area that tends to get a lot of motor vehicle theft.

Staying claims-free is the key to keeping your Calgary auto insurance rates low!

According to statistics released by Calgary’s police department for the 2013 calendar year, auto theft rates are particularly high in the downtown and city’s eastern areas. In particular, the Beltline and Falconridge have been seeing a great deal of vehicle theft activity in recent months.

In 2013, a total of 93 vehicle thefts were reported to the police in Falconridge. The Beltline placed second with 83. The previous year, the Beltline saw 78 cars stolen, and Falconridge experienced a year-over-year increase of 52 vehicle thefts. With numbers trending in the wrong direction in both areas, residents are advised to use proven anti-theft measures at all times.

It is especially important not to leave your car unattended with the keys in its ignition. According to police, approximately 40 per cent of Calgary vehicle thefts occur when owners leave their car to let it warm up.

Districts with the lowest rates of car theft include Aspen Woods, Rutland Park and Valley Ridge, all of which had only one car theft in 2013. There were no cars stolen in Rideau Park and Scarboro last year. Even so, don’t let your guard down if you live in one of these areas or you may find yourself filing a theft claim with your Calgary auto insurance company.

Calgary Auto Insurance: The Most Popular Vehicle Targets for Thieves

Ford pickup trucks are the most commonly stolen vehicles in Calgary. In 2013, 740 Ford trucks were stolen in the city. They are particularly popular because black market demand for stolen trucks is high. Many stolen trucks are clandestinely exported to developing countries.

As in many other major cities in North America, Honda Civics are also a popular target for thieves. This is due in part to the fact that the Honda Civic is one of the top-selling cars in the world, and as such, there are many of them on the road. A total of 211 Honda Civics were stolen in Calgary last year.

Police advise car owners to observe as many of the following anti-theft precautions as possible:

Car thieves tend to work under cover of night and prefer dimly lit areas. You can deter them by installing motion-detecting exterior lights if you live in a secluded area.

Lane’s Insurance is one of Calgary’s leading insurance brokerages. Staffed by a team of independent brokers, the insurance professionals at Lane’s work for you, not for the insurance company, so you’re always guaranteed to get the lowest rates on the best coverage packages. If you’re concerned about having your car stolen, talk to us about vehicle theft insurance.

We’re also happy to answer any questions you may have about car insurance, and we are pleased to offer our clients money-saving insurance bundles. Visit us online to get a fast, free, no-obligation Calgary auto insurance quote.